Blood and Ash Wiki
Register
Don't have an account?
Sign In
Advertisement
in: Characters, Male, Wolven,
and 4 more

Advisor to the King and Queen of Atlantia

Kieran Contou (pronounced: Kee-ren Con-too[1]) is a Wolven who acts as the advisor to King Casteel Da'Neer and Queen Penellaphe Balfour of Atlantia.

Kieran Contou is the bonded wolven to Prince Casteel Da'Neer. Masquerading as a Royal Guard, Kieran travels with Casteel from the Capital to Solis. He and Casteel meet up with Jericho and Commander Griffith Jansen at The Red Pearl. Kieran does not trust Jericho and offers to kill him. Although Casteel declines, he indicates that he believes that Jericho will eventually be killed. Kieran agrees hinting at his ability to "know" things that have yet to come.

Kieran then leaves Casteel alone in the room at the Red Pearl. He later returns while Penallaphe Balfour is in the room with Casteel. He knocks on the door indicating to Casteel that the envoy has arrived, causing Casteel to leave Penallaphe in the room.

After the events at the Rite, Kieran joins Casteel, Royal Guards Phillips Rathi and Airrick, Huntsman Noah and Luddie, in a special envoy to deliver Penallaphe to the Capital at the request of Queen Ileana. Kieran, along with Phillips, leads the convoy, slowing down prior to the Blood Forest. After hearing Casteel laugh loudly at Penallaphe's reaction to Casteel bringing the diary of Ms. Willa Colyns, Kieran starts looking back at Casteel and Penallaphe noticing their interactions.

The first night on their journey, the convoy rests in the Blood Forest. While four of the guards rested, Kieran and three others stood watch several yards from where Penallaphe was attempting to sleep. Kieran was close enough to notice Casteel giving pleasure to Penallaphe. After Penallaphe falls asleep, she wakes and overhears a conversation between Kieran and Casteel. Kieran indicates to Casteel that although they will reach Three Rivers prior to nightfall, they could not stay there. In response to Casteel indicating that if they broke halfway to three Rivers and rode through the night, they could make it to New Haven by the morning, Kieran asks Casteel if he is ready for that as he has noticed that growing relationship between Casteel and Penallaphe. Kieran reminds Casteel to remember what his task is. Casteel then goes and wakes Penallaphe and Kieran sees Casteel and Penallaphe hold hands. Penallaphe notes that Kieran looks concerned.

While travelling through the blood forest, the convoy is ambushed by dozens of Craven. Kieran moves with the grace of a dancer fighting with a sword in each hand. After Airrick dies in the attack, Kieran takes Airrick's place riding alongside Casteel and Penallaphe.

Kieran always has on a bored appearance but is very aware despite not looking so. He is very fond of those who are his close friends and protects Casteel with his life. He often teases Poppy for her curiosity and never ending questions and slowly warms up to her, showing that he cares for her.

He is described to have dark hair closely trimmed to the skull, pale wintery blue eyes, and warm beige skin. When taking his wolf form, Kieran has fawn colored fur. 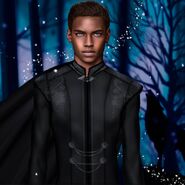 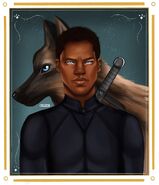 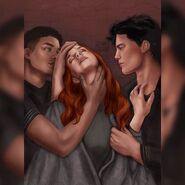 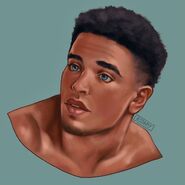