Blood and Ash Wiki
Register
Don't have an account?
Sign In
Advertisement
in: Characters, Female, Deceased Characters,
and 2 more

View source
watch 01:36
We're Getting Mutants in the MCU - The Loop
Do you like this video?
Play Sound

Queen Isbeth (pronounced: Is-bith[1]), also known as Ileana and often referred to as the Blood Queen, was the former lover of King Malec and ruler of the Kingdom of Solis until her death. She was responsible for Penellaphe Balfour becoming the Maiden.

There were no known information about Isbeth's former life. She had been the lover and confidant of Malec, who in turn was the father of her deceased son, which she had before she was poisoned by Eloana Da'Neer, and who is believed to have been killed by the royals of Atlantia. Due to the poisoning, Malec gave her his blood not sure of what would happen but he was desperate to keep her alive. Since Malec was not an Atlantian but a god due to his bloodline, his blood is more powerful he did not turn her into a vampry but something else. After her ascension, the people of Atlantia started trying to ascend their mortal loved ones as well, ending up creating the vampry. Isbeth did not have the same limitations as the Ascended and is able to walk in sunlight and has some form of abilities.

Malec had been planning to pretend to side with Eloana and the Council to eradicate the Ascended as he knew they could not continue due to the threat of their bloodlust. Isbeth had to leave Atlantia alone as it was too risky for her to escape with others, including her son since the Atlantians were hunting Ascended. Malec promised he would find her when he was able to leave, so they could escape as a family, not wanting the crown but instead to live out their lives in Iliseeum. Years passed and the war continued. Since Isbeth looked like an Ascended, she choose to stay with them to keep safe. While doing so, she ended up meeting Jalara of the Vodina Isles, who was gathering forces to fight Atlantia. She joined them to fight and learned that her son was gone and something had happened to Malec as King Valyn Da'Neer had been crowned and now lead the Atlantian armies. She ended up taking Solis and leading the Ascended, mostly because she hated Eloana and Valyn due to the lies told about both her and Malec, who was framed as the murderer of her son. Isbeth claimed that they could have stopped all of it if the Da'Neers had told the truth, that she was not vampry, that Malec was wrongly exiled, and they should have had given back the crown to the rightful king. She then vowed to take everything from Eloana and Valyn, starting with their sons Malik and Casteel Da'Neer.

Poppy and others talked about Queen Isbeth, then known under ther disguise of Ileana, but she never made an appearance. She only sent a request for Poppy to return to the capitol for her safety.

Ileana made her first appearance in Oak Ambler where she met with Poppy and Casteel to discuss the fate of the kingdoms. She taunted and teased the group from Atlantia, taking some of Poppy's anger and sass but also warning not to push her. She seemed surprised at how Poppy has turned on her and they argue. It was revealed that she was planning to marry Poppy to Prince Malik in order to merge the two kingdoms and control both, this was to be the Ascenion of the Maiden. Malik had been in her court for close to a century but appeared unharmed. Throughout the discussion, she baited and taunted Casteel, pushing Poppy to defend him. Isbeth revealed that she was told by Alastir Davenwell that their plan was to issue an ultimatum to get Malik back and provide lands east of New Haven to Atlantia, she did not agree to these terms. She said that she'd rather see the whole kingdom burn before allowing Atlantia to seize even one acre of land.

Instead she proposed a different offer, for Poppy and Casteel to claim Atlantia in her name and swear sovereignity to herself. They would retain the titles of Prince and Princess but some of the Ascended dukes and duchesses would establish Royal Seats in Atlantia. They would have to dismantle their armies and convince the people of Atlantia to follow the new rule. Lastly she would want them to hand over King Valyn and Queen Eloana, so they could be tried for treason. She then informed them of the numbers in the Solis army and showed them the Revenants and provideed a demonstration of their abilities. Casteel questioned why she hasn't seized Atlantia already if she has such large armies and Isbeth explained that she wanted to avoid losing soldiers and gain the respect and loyalty of Atlantian people rather than stealing their kingdom. When told that this won't happen, she said that feelings change especially when people realize that Poppy is her daughter. She went on to explain that Coralena Balfour was a Handmaiden and Revenant that took Poppy and her family and ran from Solis as soon as she found out the queens' plan to marry Poppy and Malik. Ian Balfour confirmed the truth and that he is not Poppy's blood relative but instead her adoptive brother, the true child of Cora and Lion. Isbeth then proceeded to reveal that is not a Vampry, and that her true name is not Ileana, but Isbeth. She also informed Poppy and Casteel about her background before leaving Atlantia and coming to Solis.

She claimed that Malik is not a prisoner and he appeared not to be, standing at her side, seemingly willing. This angered Poppy and fought back, telling Isbeth that what happened was wrong. Poppy admitted that she can't blame the former rulers of Atlantia for what she has done to the people of Solis and to her by sending her to Duke Dorian Teerman. She proceeded to ask Isbeth how giving her Atlantia will solve anything, like ending the Rite or keeping mortals safe from vampry's. Isbeth claimed it won't change anything, but that they have no room to negotiate. She then ordered the death of Ian, at the same time claming that she loved Ian, pushing the responsibility for his death on Poppy instead. Following Ian's death, Poppy lost control and attempted to attack Isbeth, but was stopped by the Queen using an invisible ability. Lyra, who accompanied Poppy and her entourage, tried to defend Poppy and is then killed by Isbeth as well. Casteel called off the group and begged the Queen not to kill Poppy, offering himself as a hostage instead. While Poppy was unconscious, Isbeth left with Malik and Casteel to return to Carsodonia, expecting Poppy to turn over Atlantia in exchange for her husband.

In her disguise as Ileana, Isbeth was remembered by Poppy as being both kind and gentle. She'd brush Poppy's hair when she was younger and she would hold her when she woke from nightmares. On the other hand, Casteel hated the Blood Queen as she was the one in charge of his capture and torture.

She came across as intelligent, cunning, heartbroken, ambitious, heartless, and cruel. She didn't hesitate to kill and threaten others and was aggressive towards anyone that threatened her. She didn't take responsibility for her own actions and blamed others for what she has done.

Isbeth was described as beautiful in a sultry way with warmth to her features that few Ascended could master. She had pale skin - though that was only makeup used to hide her darker skin tone -, lush lips, a turned up nose that was pierced with an onyx or ruby stone, and high cheek bones. Her eyes were described as black, but not as dark as normal Ascended. She had arched, deep brown eyebrows and thick dark auburn hair that fell in loose curls to her waist. 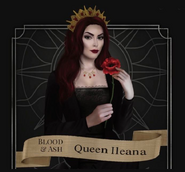