Blood and Ash Wiki
Register
Don't have an account?
Sign In
Advertisement
in: Characters, Male, Atlantian,
and 4 more

Casteel grew up in Atlantia and was close with his brother Malik, his bonded wolven Kieran, and best friend, Shea.

When Casteel grew older, he thought he could kill Queen Ileana and King Jalara by himself; he was taken by the Ascended where he was tortured for five decades. Shea, Malik, and Malik's wolven attempted to save multiple times. One day, the Ascended acted as if they knew that a rescue attempt would be made by the rightful heir to the Atlantian Kingdom, Malik, and gave Malik and Shea an opening to free Casteel. When the group was ambushed by Atlantians, Malik put up a strong fight giving Shea the opportunity to drag Casteel from the dungeons to the tunnels. While they were making their way through the tunnels, two Ascended appeared and a fight ensued.

The Ascended informed Casteel that Shea had been captured in the previous rescue attempt, and she had traded away Malik's life for her own, which is how the Ascended had been ready on this rescue attempt to capture Malik. Although Casteel did not believe the Ascended at first, Shea attempted to trade Casteel's life for her freedom. Casteel realized Shea's betrayal and killed her and the two Ascended with his bare hands. Casteel tried to search for Malik in the tunnels, but was unsuccessful and ended up on a beach where a man found him and brought him home.

Casteel originally posed under the name of Hawke Flynn, a Royal Guard from Carsodonia with glowing accolades. At The Red Pearl, he meets with Kieran, Jericho, and Commander Jansen. The four plan the death of Rylan, Penallaphe "Poppy" Balfour's personal guard so that Hawke can take up the role as personal guard. After he is alone, Poppy wanders into his room surprising him. The two of them share an intimate moment with a few kisses. They seem to enjoy themselves and Casteel even gives her the nickname Princess. As Cas attempts to get to know Poppy more intimately, they are interrupted by Kieran. As he goes to meet with an envoy, he asks Poppy to promise to stay. Although she makes the promise, Poppy leaves the establishment.

After Rylan dies at Cas's orders, Cas as Hawke steps up to protect Poppy at Rylan's funeral. Commander Jansen then assigns Hawke to replace Rylan as Poppy's personal guard. In response to a deprecating remark from Duke Teerman, Hawke tells Poppy that both sides of her face are beautiful.

The two of them meet again on the night of the Craven attack on the Rise. Hawke goes up to the Rise to find Poppy killing Craven with a bow wearing a nightgown, cloak, and bedroom slippers. Casteel is surprised and tells her she is absolutely magnificent. He least expected to find a hooded lady with a talent for archery manning one of the battlements. Although Poppy attempts to escape throwing a dagger at his face and nicking his throat with her dagger, Hawke catches the dagger and recognizes Poppy's dagger as the one the Princess had the night at the Red Pearl. Hawke reveals that he knows that she is Poppy ever since she took off the veil. What Poppy does not know is that Hawke knew who she was ever since they were at The Red Pearl. He asks Poppy to wear better clothes and shoes the next time she goes out to fight.

On the night of the Rite, Cas takes Poppy out to the gardens. They sit on a hidden bench under a weeping willow tree and share some intimate kisses and touches. Later, the two run into Vikter on their way back to Poppy's room. Vikter and Casteel argue about what Poppy means to Cas before he is dismissed by Vikter. Sometime later, the Rite is attacked by Descenters. He is absent from the ballroom during the massacre and arrives at Duchess Teerman's office in time to witness Vikter being murdered by a Descenter. Cas tries to comfort Poppy in her grief and he causes her to fall unconscious to stop her from further butchering Lord Mazeen's body. Cas watches over Poppy in the days following the Rite to make sure she doesn't hurt herself or others. He has the chest of weapons removed from her room and the servants' stairwell barred. He apologizes for not being there to protect her and tells her not to blame herself for what happened.

Poppy is summoned to the Capital for her safety. She is escorted by a small group of guards lead by Casteel. On the trip, Poppy and Cas ride on a horse together because she doesn't know how to ride and for her safety, according to Cas.

Casteel informs everyone at the table that he intends to return to Atlantia where he is going to marry Poppy. She is shocked and questions why his planes have changes regarding her. One of the wolven also shows disapproval and when he insults and threatens Poppy, Casteel kills him with no hesitation and reassures Poppy that she is beautiful and that he will not allow anyone to speak to her that way.

Poppy tries to escape but she is later found by Casteel and they fight a dozen Craven together. Poppy informs Casteel that she will try to escape again and he tells her that he aspects nothing else from her. While in bed, Poppy has a nightmare and after he wakes her he shares with her that he indeed had his own nightmares from the time he spent in captivity. He questions her about the nightmare and the duke's lessons. They fall asleep holding one another . Casteel takes Poppy to a tomb where are written names of the victims of the Ascended, mostly children separated from their families and who died at a frigid age.

When posing as Hawke, Casteel has an easy-going character with a teasing nature. He seems to be someone who is easy to get along with and to talk to, making him more likable. Still, he can be serious when he wants to be; this happens when he poses a Royal Guard, where he is protective of Poppy. Casteel's personality is similar to that of Hawke, but where Hawke is soft and kind, Casteel is extraordinarily cunning, teasing and devious, solidfiying his nickname as The Dark One. As a prince, Casteel exudes charm and grace but on the same hand assertiveness. He will go all the lengths to remind people of his power and respect towards him through both brutal words or actions, such as killing to prove a point. He can be deadly when he is The Dark One, but he does not enjoy the killings, but knows them to be a neccessity.

Casteel is described as beautiful on several instances. He has dark, thick hair that curls at the nape of his neck and often falls forward, brushing equally dark brows. His cheekbones are high and wide, nose surprisingly straight for a guard. His square jaw is firm, and his mouth well formed. When he smiles, the right side of his lip curves up, and a deep dimple appears. Sometimes, dimples appear on both cheeks when he is freely smiling and able to show his fangs. He is also mentioned multiple times, to be very tall, roughly larger than six feet. He possesses captivating eyes which are a pool of gold and honey. He smells of cinnamon, dark spices, and pine.

The relationship between Casteel and Shea started as a friendship, when they were young. Over the years, they grew closer and fell in love. At one point they became engaged. Yet they never shared a sexually intimate relationship as Poppy and Cas do. After Casteel was taken prisoner by the Ascended, both his brother and Shea tried to rescue him multiples times. Finally they succeeded, only for it to be revealed that Shea had bartered away Malik's life to save her own. The Ascended did not expect Malik to put up such a great fight, and Shea was able to take Casteel. Casteel and Shea were then stopped by more Ascended, who taunted Casteel with the truth regarding Shea's betrayal. Shea then attempted to trade Casteel's life for her own safety, leading Casteel to kill both the Ascended and Shea.

Casteel tells Poppy that nobody betrays someone they love like that and while Shea had probably loved him at some point, he knew the moment she valued her own life over Cas's that she did not love him or her country anymore. He says that he while he once loved her, he only feels hatred for her now.

The relationship between Casteel and Poppy begins when he is posing as a Royal guard, sworn to protect Poppy. They begin to develop a friendship, where they understand each other; they both lost people they care about and are both conflicted between love and duty. Their friendship begins to become closer when they kiss under a willow tree on the castle grounds. Casteel then killed the Duke of Masadonia in Poppy's name, after learning the man abused her for years. They leave Masadonia for Carsodonia and their relationship develops further when they snuggle together in the Blood Forest and have many intimate and tender moments. When they arrive at the Keep of New Haven, they begin to get to know each other's lives and soon have sex.

Soon, Casteel's betrayal is known and Poppy is heartbroken but Casteel claims that not everything was fake. Later on, they become engaged for convenience. Ever since his betrayal, they both have trouble opening up their feelings and so they pretend, not knowing that they both care for one another. Even though they are pretending, they both share several tender moments with each other and even engage in a few sexual interactions.

Eventually, Poppy decides and says she doesn’t want to pretend anymore, which Casteel agrees with, and the two have sex for the first time since New Haven, in the Cavern. Later on, they have an argument about their relationship and the hidden truths they keep from each other. They reconcile though, when they both reveal their true feelings about everything and each other. Although neither of them say the words out loud, Poppy feels Casteel’s emotions to be that of love, using her power. He proposes to her, for real this time, and she accepts. They marry the same day, both content and happy now that the marriage is real between them.

Kieran is Casteel's bonded Wolven. The two of them share a brother-like relationship and are extremely close. Kieran is both Casteel's protector and confidante, and on top of that the one person who Casteel trusts to protect Poppy. He worries for Casteel a lot and can feel his pain and sickness because of their bond. During the five decades of Casteel's capture by the Ascended, Kieran is weakened and ill due to his bonding with Casteel. 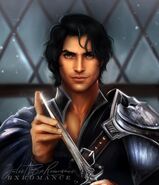 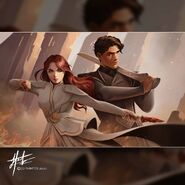 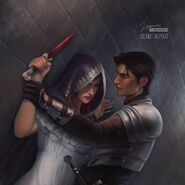